"Ludwig II (German: Ludwig Otto Friedrich Wilhelm; English: Louis Otto Frederick William; 25 August 1845 – 13 June 1886) was King of Bavaria from 1864 until his death in 1886. He is sometimes called the Swan King or der Märchenkönig ("the Fairy Tale King"). He also held the titles of Count Palatine of the Rhine, Duke of Bavaria, Duke of Franconia, and Duke in Swabia.

He succeeded to the throne aged 18. Two years later, in 1866, Bavaria and Austria fought a war against Prussia lasting only a matter of weeks, which they lost. However, in the Franco-Prussian War of 1870 Bavaria sided with Prussia against France, and after the Prussian victory it became part of the new German Empire led by Prussia. Though Bavaria retained a degree of autonomy on some matters within the new German Reich, Ludwig increasingly withdrew from day-to-day affairs of state in favour of extravagant artistic and architectural projects. He commissioned the construction of two lavish palaces and Neuschwanstein Castle, and he was a devoted patron of the composer Richard Wagner. Ludwig spent all his royal revenues (although not state funds as is commonly thought) on these projects, borrowed extensively, and defied all attempts by his ministers to restrain him. This extravagance was used against him to declare him insane, an accusation which has since come under scrutiny. Today, his architectural and artistic legacy includes many of Bavaria´s most important tourist attractions." - (en.wikipedia.org 31.01.2020) 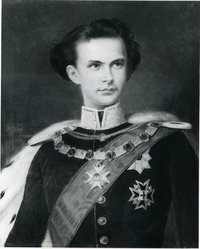