Porzellan herstellende Firma in Paris.
"Edmé Samson (b Paris, 1810; d Paris, 1891), founder of the ceramics firm Samson, Edmé et Cie (commonly known as Samson Ceramics), was a famous copyist (and perhaps forger) of porcelain and pottery. Samson began his career by making service and set piece replacements in the late 1830s. In 1845 he opened the ceramics firm Samson, Edmé et Cie at 7, Rue Vendôme (later Rue Béranger) in Paris, with the intention of supplying reproductions of ceramics on display in museums and private collections. The factory was moved to Montreuil, Seine-Saint-Denis in 1864 by Samson’s son, Emile Samson (1837-1913). The firm either drew inspiration from other factories, or directly copied their pieces. Designs from the factories of Meissen, Sèvres, Chelsea, and Derby were among the reproductions Samson, Edmé et Cie produced, along with designs copied from and all the major factories of England, France and Germany. During the 19th century, the market for fine china was considerable and Samson’s firm reproduced ceramics in a breadth of styles including the faience and maiolica types of Italian pottery, Persian style dishes, Hispano-Moresque pottery (a blending of Islamic and European motifs, produced during the 13th to 15th centuries), plates in the FitzHugh pattern, as well as plates designed by his fellow Frenchmen, Bernard Palissy. Another frequent style copied by the Samson firm was the famille rose and famille verte styles produced in China between 1720 and 1790. Imari wares, named for the Japanese port where a type of richly decorated porcelain made at Arita was shipped, were also copied by Samson." (Wikipedia (engl.), 18.04.2013) 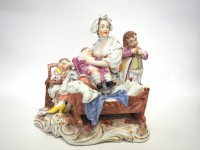