On 22 November 1754 in Coburg, she married Margrave Karl Alexander of Brandenburg-Ansbach and Bayreuth (1736-1806). The marriage was concluded for dynastic reasons. Although Frederica Caroline was considered virtuous, gentle, charitable and devout, her husband found her ugly, ignorant and boring. The marriage remained childless, he separated from his wife, who by that time lived at Schwaningen Castle in Unterschwaningen, and began to live with his mistress Elizabeth Craven." - (en.wikipedia.org 29.03.2020) 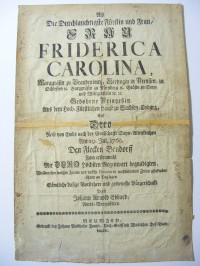