"The Stadtarchiv Speyer is the oldest municipal archive of the Palatinate.

The earliest document, which is kept in the city archives of Speyer, is a document of emperor Friedrich I of 1182, in which the privileges granted by emperor Heinrich V to the town of Speyer in 1111 were confirmed and extended. The tradition of the archive dates back to the late 13th century, when Speyer became a Free Imperial Town of the Holy Roman Empire in 1294.

Now it is one of the oldest offices in Speyer. In addition to a large number of historically important documents and archives, it also offers today a large collection of photo and newspaper collections," - (en.wikipedia.org 31.01.2020) 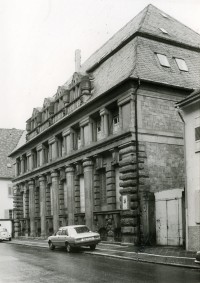