"Louis IX (25 April 1214 – 25 August 1270), commonly known as Saint Louis, is the only King of France to be canonized in the Catholic Church. Louis was crowned in Reims at the age of 12, following the death of his father Louis VIII; his mother, Blanche of Castile, ruled the kingdom as regent until he reached maturity. During Louis´ childhood, Blanche dealt with the opposition of rebellious vassals and obtained a definitive victory in the Albigensian Crusade which had started 20 years earlier.

As an adult, Louis IX faced recurring conflicts with some of the most-powerful nobles, such as Hugh X of Lusignan and Peter of Dreux. Simultaneously, Henry III of England tried to restore his continental possessions, but was utterly defeated at the battle of Taillebourg. His reign saw the annexation of several provinces, notably parts of Aquitaine, Maine and Provence." - (en.wikipedia.org 05.11.2019) 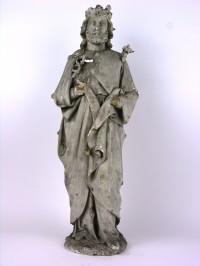