"Publius Quinctilius Varus (46 BC Cremona, Roman Republic – September 15, 9 AD near Kalkriese, Germany) was a Roman general and politician under the first Roman emperor Augustus. Varus is generally remembered for having lost three Roman legions when ambushed by Germanic tribes led by Arminius in the Battle of the Teutoburg Forest, whereupon he took his own life." - (en.wikipedia.org 31.10.2019) 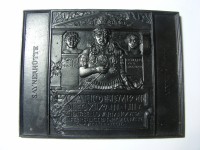