"Cecilia, also known as Saint Cecilia, (Latin: Sancta Caecilia, English: alternate spelling - Cecelia) is the patroness of musicians. It is written that as the musicians played at her wedding she "sang in her heart to the Lord". Her feast day is celebrated in the Latin Catholic, Eastern Catholic and Eastern Orthodox churches and in some churches of the Anglican Communion on November 22. She is one of seven women, in addition to the Blessed Virgin, commemorated by name in the Canon of the Mass in the Roman Catholic Church.

While the details of her story are apparently fictional, her existence and martyrdom are considered a historical fact. She is said to have been beheaded with a sword. An early church, Santa Cecilia, was founded in the 3rd century by Pope Urban I in the Trastevere section of Rome, reputedly on the site of the house in which she lived. A number of musical compositions are dedicated to her, and her feast day has become the occasion for concerts and musical festivals." - (en.wikipedia.org 07.02.2020) 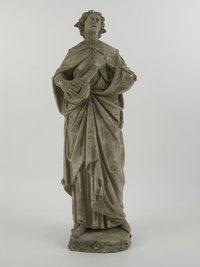